I first discovered raspberry vodka a few years back whilst running a pub. It was Absolut Raspberry and as with everything that is new it had an initial surge of popularity that then curbed and evened out. It wasn’t just a flash in the pan; we kept it in stock and a few regulars that drank it with lemonade (that’s 7-up style lemonade). It was also a handy ingredient to use in shooter and cocktail recipes.

As mentioned, Absolut Raspberry and fizzy lemonade like 7-up or Sprite is a simple combination that works well.

Fresh lime and soda. Squeeze a wedge of lime into your drink or just drop a wedge right in if you want just a hint of lime.

If you like your drinks extra sweet add a dash of grenadine to the mix.

Yield: Using 135 g of jelly will produce 600 ml of liquid so depending on your shot glass size you should get about 20 shots (30 ml per shot). One packet of Jell-O is 3 oz which is 85 g so scale up or down as required.

How to Make Raspberry Vodka 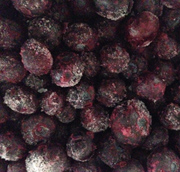 You could infuse vodka with both raspberries and blueberries. Frozen blueberries (pictured right) will have the most effect on the colour of the vodka. Blueberries will also come out of the vodka bottle more readily. Unless you chop or crush up your raspberries you may need a bit of digging and jigging to pull them all out of the neck of the bottle. Crushing them will result in a far stronger infusion. It depends on whether your want the visual effect of whole pieces of fruit in the vodka with just a hint of flavour or a stronger, infused taste and a mushy mash of fruit pulp. 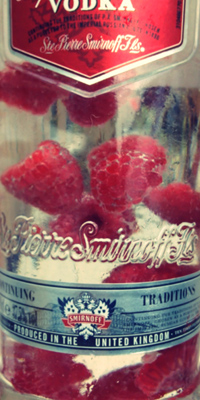